I know I disappeared for awhile, and I'm coming back to basically say that I'm officially "disappearing". Though not REALLY disappearing, because I'm still creeping around reading my favorite blogs when I get a chance, but I've finally come to terms with the fact that I just don't have time to dedicate to a blog. So I'm putting my blog on hold indefinitely....but I'll at least leave it like that, perhaps I will get in a groove again where I can devote more time to it.

So, in case you're wondering about me, not much has changed, I haven't regressed horribly in my old ways and hit rock bottom, I've still been running 5ks and trying to make smart eating choices (though not as often as I did previously). Not much on the weight loss front, but I'm okay with that, I've hit a few road bumps and I know I'll get where I want to be sooner or later.

And not a super clear pic, but it's basically the only thing I could find that was relatively recent (this is me about a month ago). Figured I should let you all know that I'm doing ok! 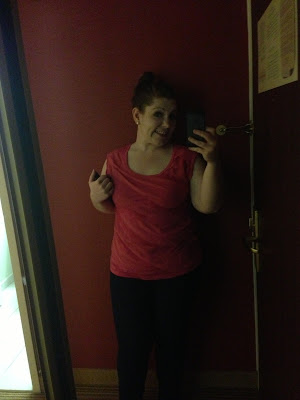