First, sorry for my absence friends. I know a few people have been asking about me, the short of it is that some drama went down in my personal life last month and I let it distract me. Moving on though...

I live in Massachusetts, and this past weekend we got hit with a major snowstorm, Blizzard Nemo (yeah, they name our winter storms now just like hurricanes). Us New Englanders are used to snow but this one was definitely one for the record books. My town ended up being in the storm's "sweet spot", so when all was said and done we had over 2 feet dumped on us and snow drifts closer to 3+ feet. The Governor actually declared a driving ban on Friday at 4pm ordering everyone off the roads (or potentially face a year in prison and a $500 fine)...this was actually the first time in my lifetime anything like that has happened. Last time they had a driving ban was after the blizzard of '78. They finally lifted it yesterday at 4pm, but the roads still were less than perfect.

Yesterday was all about digging out. You think a Bob Harper kettlebell workout is hard? Try shoveling two feet of snow with nowhere to put it except on top of other piles of snow. Lots of lifting. The piles of snow in my neighborhood are just unreal. When I went to unbury my car, I actually couldn't even figure out where the front of it began, because the snow came up and over the front. Luckily for me, I parked under some trees so I was actually sheltered from a lot of it. 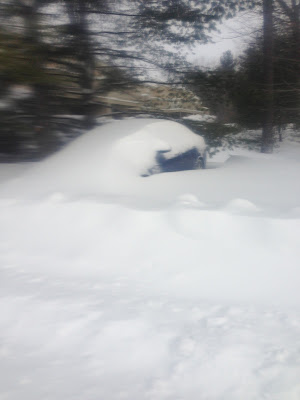 Anyway, today I am CRAZY sore from yesterday's Nemo workout. Definitely going to take today as a rest day before I get back into things tomorrow. Looks like I'll be doing a 5k next month, happy that I've got something I can focus on....still haven't gotten that sub-40 5k in yet and I'm thinking this next one could be it :-)